From my previous post, I showed you the block outcome of slashing and dashing technique and be done!
Its fast and fun to make, but more importantly looks as though you slaved for hours over it. Its our secret! 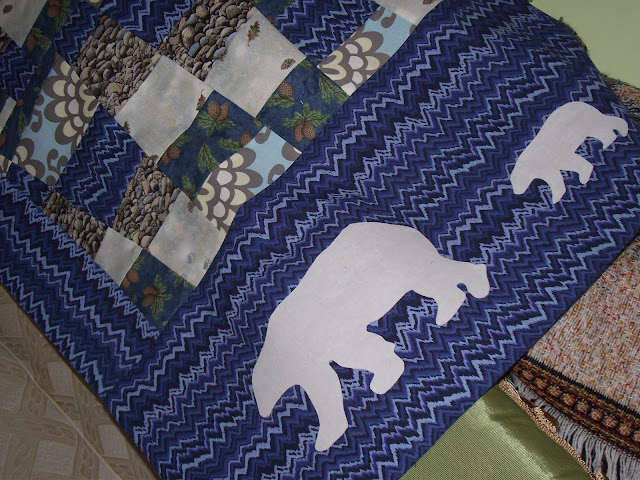 With this "flip and mix" multiple project table runner pattern, you'll be very able to finish this whole table runner in less than a day. I've got more coming that show the range of animals templates for a each an delicious individual personal gift from your sewing room!

To make this great project, I used fabric from Amy Butler, RJR and some fabrics I bought several decades ago. My design goal is to use up that older fabric "with" the newer fabric in a flash.

My patterns take the lead in helping quilters to use up that stash of older fabric blending with new fabrics so popular and bright today.

Follow me to keep up to date on the fresh, modern quilt, toys, baby blankets and home decor patterns coming from my studio! You'll be the first to know of give away's and free patterns.
No comments:
Labels: finishing quilts. embroidery

Slashing and Dashing-This is so fast!

i just picked up Kathy Schmidt's book Rule Breaker Quilts and was very tickled. I'd been playing with something along these lines and there it was in a book. Her technique is excellent! Thanks Kathy! 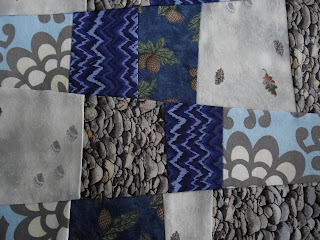 Its so right on! Breaking the rules, ya take it and run with your imagination. Kathy's technique will never he the same twice! This is my start with her Stack and Slash technique. Lets stand up to the Quilt Police!
No comments:
Labels: finishing quilts

I was at a retreat a few weeks ago and this new friend of mine had a contact to get all the donation quilts to Calgary, Ab and then they are shipped to Japan.

I thought about that and realised I had a few orphaned blocks sitting around that I could sew up real fast and get it to her. Thanks Coralee! 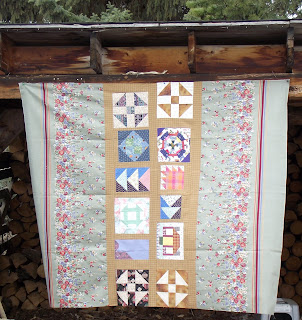 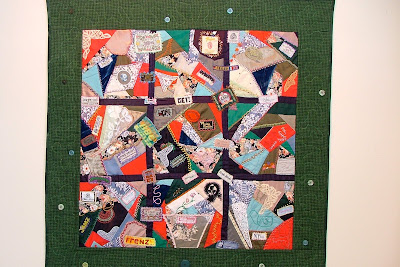 Sometimes funny things happen to you, you know the kind that are a  happy accident. This quilt was made a real low point in our finances. Lots of history that doesn't need to be dragged up and spread all over the Internet. But this quilt was made during that very difficult time.
It is a unique quilt because it is made from 99% recycled linings of ladies line jackets and blazers. Only five colours were picked and used. It kind of ties all the various odd shapes together. I used dark burgundy coloured lining material for the dark horizontal and vertical sashings. It was quilted as I went on  each with all the threads from the hand embroidery hidden inside the sandwiched blocks. It won 1st Prize at IMP Quilt Show in Ontario in 2004. I won a beautiful oak wooden hand made quilting frame with a rotary frame, its an awesome lap quilt frame.
No comments:
Labels: finishing quilts. embroidery 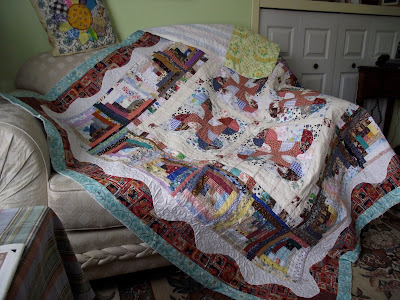 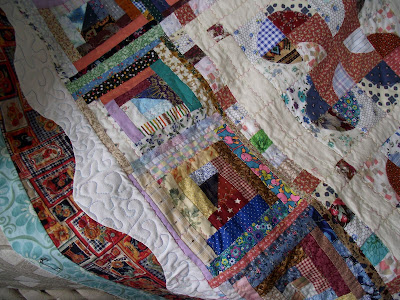 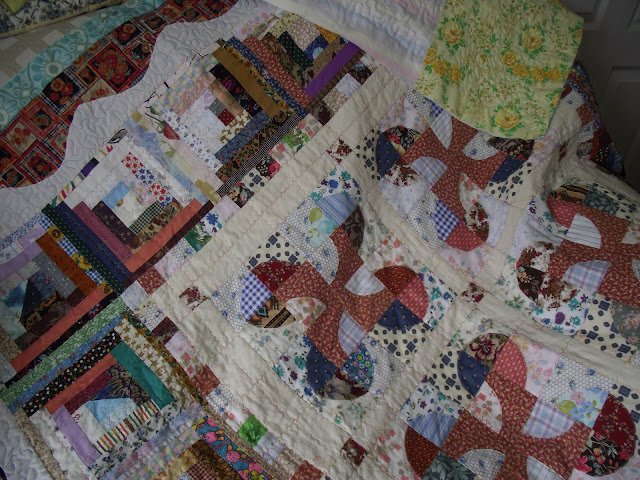 This quilt is a special one. It started with the "Drunkard's Path" blocks in the center, all using 100% recycled cotton shirting, surrounded by the new hemp/cotton muslin. Then I got a bad case of colds, bronchitis and I have asthma, so I was curtailed often to my bed for resting. I was sick so long that my sons learned how to cut the 1 1/2 inch strips of lights and darks for the "Log Cabin" blocks. Of which, many are hand sewn from all sorts of scraps of new and reused cloth. I started this in 1994, then in 1997 started with the log cabin blocks. Then around the year 2000 I sewed the log cabin blocks onto the outside area of the center piece of DP blocks. By this time, my sons were growing up and I then began working outside the  home and more time evaporated until 2003 when we moved north. Then I took it out again and began to try and put towards a finished stage, but the I only had on hand a reused muslin which began unruly and wouldn't cooperate and lie flat on the border. So it went back into the bin until 2008 when I found a great chunk of 100% cotton curtain or table cloth weight of fabric. I decided it was just busy enough to lend itself to the whole quilt. I sewed on the second border right behind the muslin, then pinned the muslin down and took a pair of scissors and with no template, cut the wavy border out that way. Appliqued it down with a hand blind stitch onto the busy outer border. Then I discovered Fishskin Fabric, www.fishskinfabric.com and fell in love with that floral print from Amy Butlers line of fabric.
This quilt was machine quilted last weekend at the Rough Acres Bible Camp in Houston, BC www.roughacresbiblecamp.com and I'm planning on picking out a nice darker colored binding to sew on this weekend.
No comments:
Labels: finishing quilts 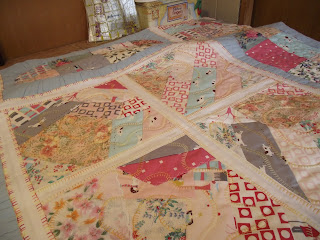 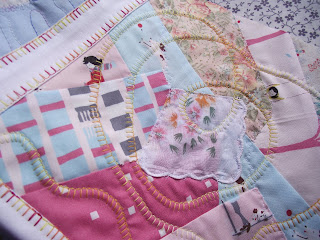 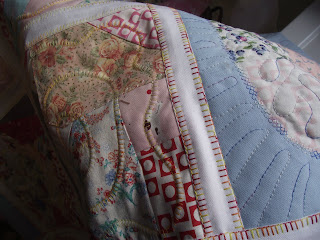 These photos are the latest on new designs. I love crazy quilting and this is a good one!
5 comments:
Newer Posts Older Posts Home
Subscribe to: Posts (Atom) 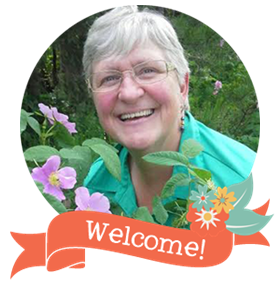