Last year when I heard of the coming Centennial for Smithers, my largest nearby town in Northern BC, I spoke up and put my thoughts on paper. I was pleased that the Centennial Committee was interested and I began planning the project. 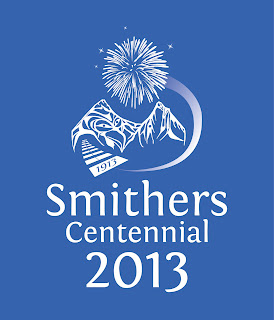 Community interest in our Centennial Events is already high and I eventually had 7 artists step up volunteering a piece of their art to be included in the Smithers 2013 Centennial Quilt Project.

The following are photos of the submitted blocks and the artist or sometimes just the block. Take a look at the beginning of this unique quilt creation of 7 artists collaborating around me who is the main finisher of this quilt. I'm OK with this and have little time to involve anyone else, still work full time and have a life too! So onward goes the quilt, quietly gaining ground in an enormous amount of work. If you ever think that you want to make a centennial quilt, they are numerous sites that exist for any kind of quilt you'd like.
I have a great team of talented artists who submitted their work for this one of a kind Centennial Quilt.

The piece below is designed and made by talented painter, Anne Havard of Smithers, BC. This block represents the form of transportation of people and goods to the Bulkley Valley at the time in 1913 when Smithers was just a boom town in the wilderness. Forestry, farming and mining brought droves of pioneers to the valley. 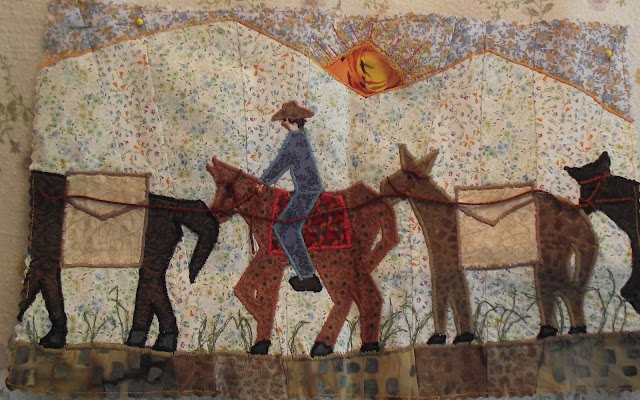 A quilt's namesake couldn't be forgotten and this block I made using various techniques of Susan Carlsons from her book Serendipity Quilts. I recommend this book if you like making innovative transformation quilts.

"Sir Alfred Waldron Smithers began his association with the Grand Trunk Railway in 1896, when as a director, he made his first trip to Canada. He traveled through the area several times doing railway business. In 1909 he took over as Chairman of the line, retaining his position until the Government of Canada took over the Grand Trunk Railway. His family name, Knockholt, Sir Alfred's family home in Kent, England, now dignifies a small railway stop east of Houston, BC and Lake Kathlyn, just west of Smithers, was named after one of Sir Alfred's daughters and Alfred Ave. in Smithers is named after himself." quote from "Smithers, From Swamp to  Village", by R. Lynn Shervill in a project made possible by the 60th Anniversary Project of the Town of Smithers. 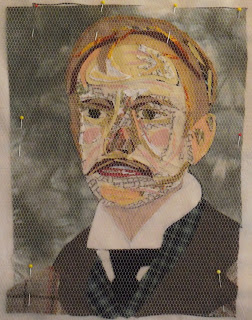 Nicole Tessier of Telkwa, another talented quilter offered up this beautiful block representation of Old Church in Smithers, BC. 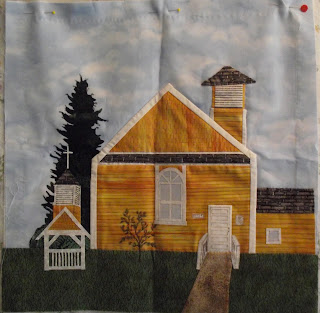 Todd Tracy Lace of Moricetown, a talented trained chef, is also a talented textile artist, painter and recycler of wood extraordinaire made three fish, one female and two male that represent the ongoing cycle of salmon, food source to the Wetsu'weten people of this area. I had his painted renditions made into a exact copy in machine embroidery, provided free of charge by BV Dry Cleaners in Smithers, BC.
Thanks Terri! 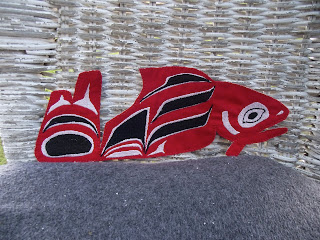 Todd is working with leather here as he's making a ceremonial moose hide groom's attire for an upcoming wedding. 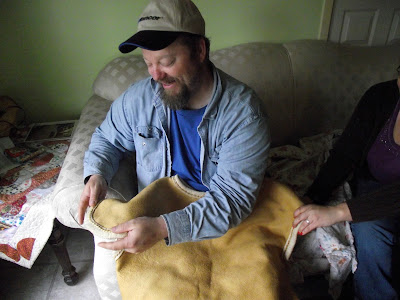 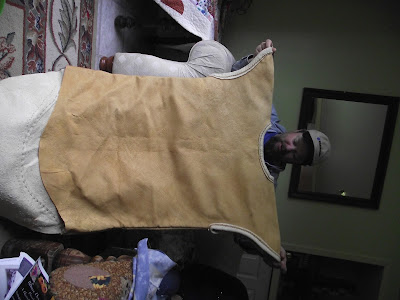 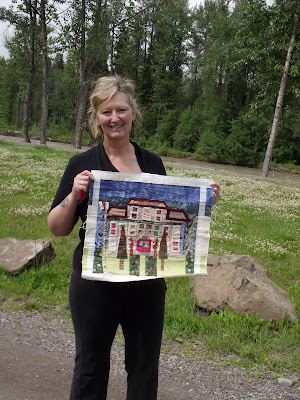 Linda Stringfellow above with her artistic expression of our original Court House, which now houses, many artists, an art gallery and museum all in downtown Smithers, BC. 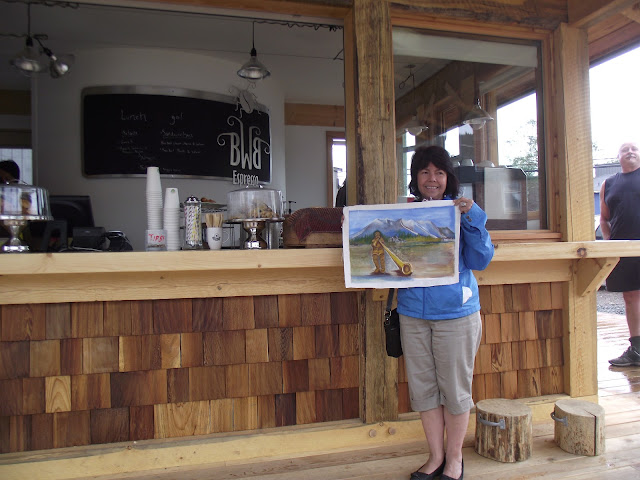 Martha Wertz's version of the Swiss and European community of Bulkley Valley, "Alpine Al" is the fellow blowing a long horn. Martha stands in front of Bugwood Bean a new funky coffee vendor on Main Street.

Lastly, a good friend, a fellow artisan director on the forming committee around ArtCore54, Perry Rath is a mystical artist in my view. His art makes take a break and dream. Visit his web address for more of his art for sale.

I'll be posting the progress as I get it done and move onto another part of the quilt.

When I started the four central blocks of this Christmas Crazy it was around 2014. I was looking for another crazy quilt to provide me a win... 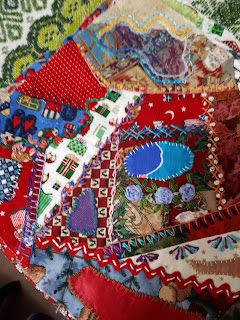